This product is a balanced and comprehensive B complex supplement that contains eight essential B vitamins, along with choline, inositol, and folate as Quatrefolic™ – 100% 5-MTHF, the biologically active form of folic acid for optimal methylation. B vitamins have historically been taken together for their synergistic role in supporting energy production, immune health, cardiovascular health and neurological health. Adequate B vitamins are essential for maintaining energy levels and additional intake is often needed by those with high levels of stress. This product offers high-quality nutrients, which help to build a healthy micronutrient reserve.

Dosage
1 or more capsules per day or as recommended by your health care professional.

Does Not Contain
Does not contain gluten, corn, yeast, artificial colors and flavors. 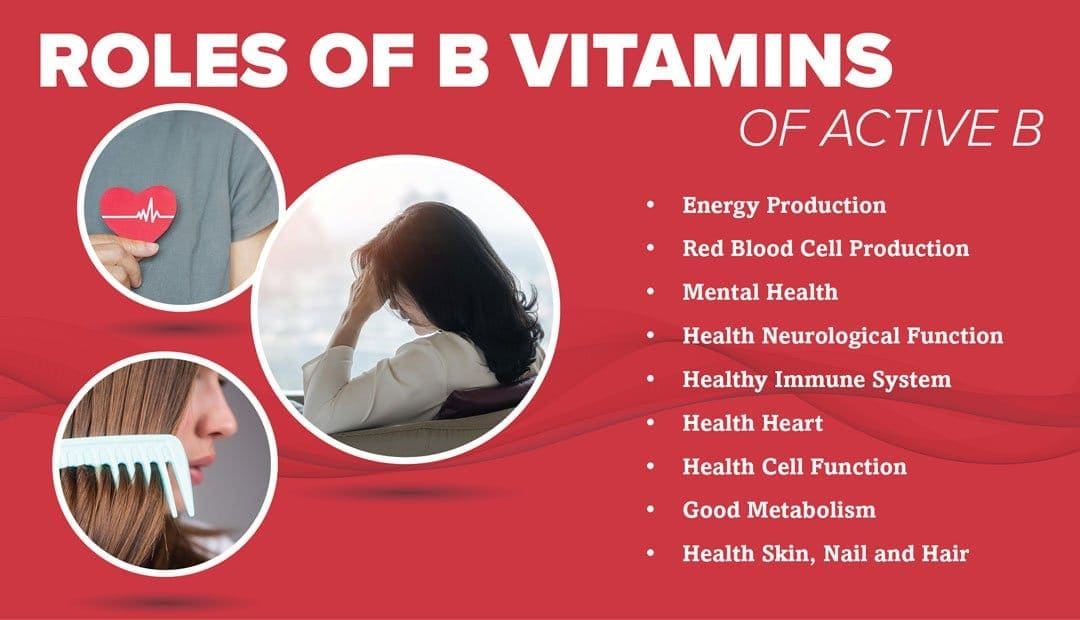 A wide and complex variety of B vitamins is essential for the body to convert food into cellular energy. These water-soluble groups of vitamins are first absorbed in the small intestine and then travel to the liver where they are biotransformed into their active coenzyme forms. One of the key roles of B vitamins is to serve as prime coenzymes for the Kreb’s cycle, the biochemical pathway responsible for maintaining energy production in the form of cellular energy. In addition, B vitamins, particularly folic acid, B6 and B12, are critical for proper methylation, a biochemical process that helps convert the problematic amino acid metabolite homocysteine into the amino acids methionine and cysteine. This process is vital for supporting cardiovascular and mental health, a healthy nervous system, regulating gene expression, proper energy metabolism, as well as immune and nerve cell function. Methylation occurs billions of times every second and helps the body to repair DNA on a continual basis. However, when methylation processes in the body slow down, an increase in the breakage of DNA strands can occur. In addition to maintaining DNA repair, methylation reactions help maintain optimal neurotransmitter production, homocysteine balance for cardiovascular health, recycle molecules that are required for detoxification and support a healthy inflammatory response. Proper methylation can be inhibited by nutrient deficiencies including folate, B2, B6 and B12. 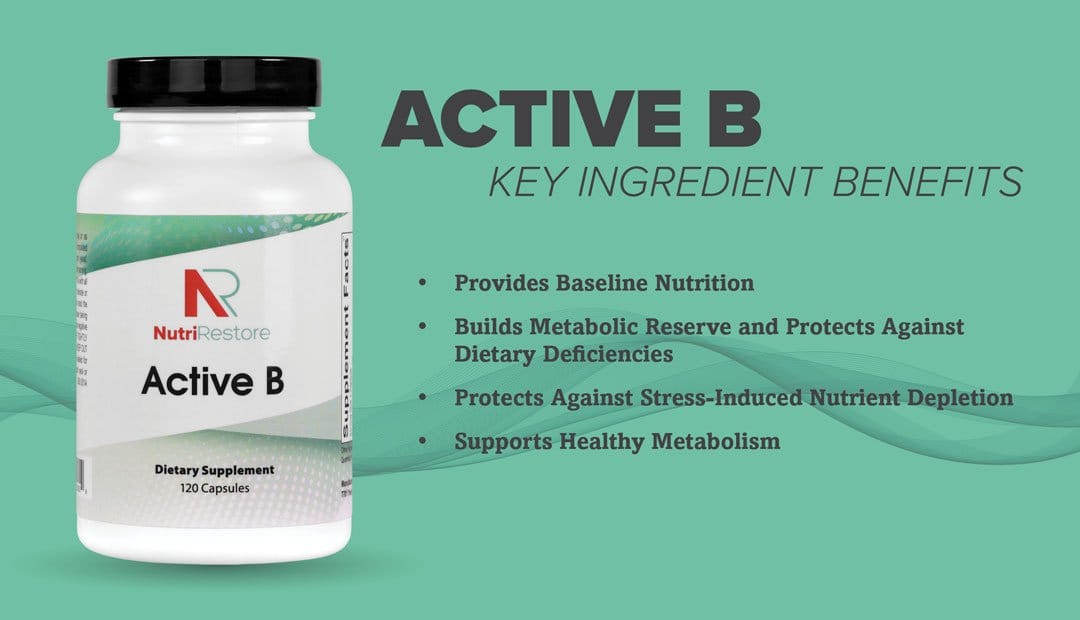 Deficiency in any of the B vitamins can create a breakdown of metabolic processes that protect health. Many medications deplete certain B-vitamins including acetaminophen, aspirin, ibuprofen, oral contraceptives and SSRIs, along with stress and poor diet. Deficiencies of folic acid, B6 and B12 can specifically impair proper methylation, which affects many aspects of health.

Folate is a water soluble member of the B complex vitamins that is critical for maintaining optimal methylation. Folate is found naturally in foods such as fruits and dark leafy vegetables, but can be easily destroyed by cooking or processing. Additionally, enzyme defects, malabsorption and congenital deficiency of 5-methylenetetrahydrofolate reductase (5-MTHFR), an enzyme required for the conversion of folic acid to its bioactive form
5-methyltetrahydrofolate (5-MTHF), can result in an impaired ability to activate folic acid. In individuals with a genetic defect of this enzyme, supplementation with 5-MTHF has been shown to be beneficial. 5-MTHF is required as a methyl group donor
for the production of mood regulating neurotransmitters such as serotonin, the synthesis of melatonin, as well as DNA production and repair. 5-MTHF also donates its methyl group to vitamin B12 (cobalamin), forming methylcobalamin. Methylcobalamin helps convert the amino acid metabolite homocysteine into the amino acid methionine. Consistent recycling of homocysteine is vital to supporting cardiovascular and arterial health.

While naturally abundant in whole grains, thiamine is lost in many of the over-processed grains commonly consumed today. Thiamine is an essential co-factor in the production of ATP in the cells’ Kreb’s cycle, and is also needed for the metabolism of fats, proteins and carbohydrates. A recent randomized double blind placebo-controlled trial found that supplementation with high-dose thiamine also supports blood sugar balance.

Riboflavin is a precursor to flavin adenine dinucleodtide (FAD) and flavin mononucleotide (FMN), both of which are central to energy production, intermediary metabolism, and act as powerful antioxidants. Riboflavin-depleted cells have been found to display signs of greater oxidative stress and disrupted energy generation. Studies have also shown that optimal riboflavin status has been found to help maintain healthy blood pressure already within normal range in patients with certain genetic predispositions.

Niacin is a cofactor in the mitochondrial respiratory chain, which produces cellular energy. In the body, niacin is transformed into NAD (Nicotinamide adenine dinucleotide) and NADP (Nicotinamide adenine dinucleotide phosphate), which both play a role in oxidation reduction reactions in cells. Niacin or nicotinic acid has a long history of use in cardiovascular health, having been shown in numerous studies to support endothelial health.

Vitamin B6 is involved in over 100 enzymatic reactions in the body and is essential for gluconeogenesis, lipid metabolism, neurotransmitter formation, immune health and hormone modulation, and is essential in methylation, for the breakdown of homocysteine. A large, prospective study found that women who consumed, on average, 4.6 mg of vitamin B6 daily had significantly better markers of cardiovascular health compared to women who consumed an average of 1.1 mg daily. In addition, vitamin B6 has been found to promote normal lymphocyte proliferation and interleukin-2 production in older people, both of which are important for optimal immune function.

Vitamin B12, found only in organ meats, seafood and egg yolks, often becomes deficient in vegan and vegetarian diets. The vitamin is essential for the metabolism of fats and carbohydrates, the synthesis of proteins, and also plays a role in regulating mitochondrial enzymes and energy metabolism, as well as neurological health. In a population study of 700 women aged 65 and over, more optimal B12 levels were found to be associated with better mood balance and health.

Synthesized by the bacteria in the gut in addition to certain foods, biotin and its cofactors are involved in metabolism of fatty acids, amino acids and utilization of B vitamins. Biotin has also been found to support healthy blood sugar both in animal and human studies. A randomized, double-blind placebo-controlled clinical trial conducted among 70 patients, age 5-25 years old with blood sugar concerns found biotin administration to serve as an adjuvant, which improved sugar management, as well as the balance of blood fats.

Pantothenic acid and its biologically active derivative, CoA, are essential to the synthesis of fatty acids, membrane phospholipids, amino acids, steroid hormones, and energy production. 95% of CoA is found in the mitochondria. Pantothenic acid has also been shown to have a balancing effect on blood fats in animal studies and has also been shown in the research to support wound healing.

Though not technically a B vitamin, choline is often associated with B-vitamins. It is important in the construction of cell membranes and plasma lipoproteins, plays a role in cell signaling and in the synthesis of acetylcholine (a neurotransmitter), and is vital for brain development. The oxidized form of choline acts as a methyl donor in the methionine cycle. In a study of 51 men and women, subjects fed an intentionally choline-deficient diet had greater levels of lymphocyte and DNA damage.

Be the first to review “Active B” Cancel reply